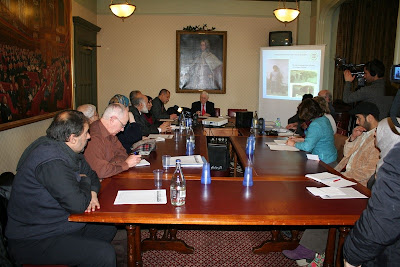 Tuesday morning, I chaired a seminar on the catastrophic deterioration of human rights in Bahrain. 23 leading human rights activists are in trial for a variety of nebulous offences, and all of them had to endure a period of solitary confinement during which they were tortured The judge dealing with the case refused the defendants' plea that the torture should be investigated first, on the grounds that false confessions had been extracted from them, and this was the only evidence for their 'crimes'. The defence lawyers then walked out, and the judge said he would appoint replacements, but the defendants said they wouldn't accept that proposal, which is contrary to the International Covenant on Civil and Political Rights. Under the ICCPR, everyone is entitled to appoint a lawyer of his or he own choice. At question time, we had an exchange on the Chagos Islands, see www.publications.parliament.uk/pa/ld201011/ldhansrd/text/101214-0001.htm#10121445000903. The Government line is that they have been told by the Americans that any return of the inhabitants who were kicked out by the British to make room for a us military base would create unacceptable security problems. Before President Obama came into office, the FCO twice persuaded the Americans to put their objections in writing to help with the court case, but now we are supposed to believe that only a verbal reiteration of the previous administration's policy has been offered. Wikileaks published the desperate plea of the FCO for the Americans to put it in writing, and the fact that they haven't done so makes it look as though there would be no security concerns if the few Chagossians who would want to return lived on the outer islands, 140 miles from Diego Garcia.
Posted by Eric Avebury at 10:42 AM