Speech on the situation in the Democratic Republic of Congo

Lord Avebury: My Lords, the right reverend Prelate has drawn our attention to the desperately bleak history of the DRC. The noble Lord, Lord Alton, has just spoken about the horrible present. We might feel depressed as we consider what the United Kingdom can do, if it were not for the fact that, as the noble Lord, Lord Giddens, has told us, this is not a forgotten country.

Things are happening there. In particular, working towards the elections on June 18 is the biggest and most costly exercise of this kind ever undertaken by the United Nations. If they contribute towards a peaceful and orderly environment, allowing the 460,000 refugees in neighbouring countries to return and the 1.3 million people displaced internally to be rehabilitated, it will be a rewarding investment for the international community. We welcome the decision by the European Union to comply with the request of the Secretary-General to provide additional troops for the election itself and the immediate post-election period—though we do wonder whether such a small number of troops for such a short time can be more than just a token of moral support. Apparently, there will be only 400 to 450 EU troops in the DRC, with a further 800 to 1,000 on standby somewhere else. Is the UK providing any of these troops and, if so, how many and in what capacities?

The European Council statement of 23 March says the 450 troops will be deployed in Kinshasa, with the other 1,000 somewhere "over the horizon", outside the country. But any attempts to disrupt the elections, which the commander of the local UN force has said he will deal with proactively, are likely to be at the other end of the country, in the east. So what will the European Union troops be doing in Kinshasa? Who is going to pay for them? The Council statement seems to imply that it is the EU rather than the states

contributing to the force, which is fair; but the Minister said in the week before last that we are making a £40 million contribution to MONUC. Presumably the EU contingent is not covered by MONUC's budget. Perhaps the Minister could enlighten us on that point.

The European Council says that it will,

but surely this needs to be properly defined and amplified. The Minister's gloss was that the EU troops,

However, he then added that discussions were going on about what they might do, implying that no firm decisions had yet been made. Will the EU contingent come under the command of General Cammaert—in which case, they can presumably be asked to do anything that comes within the mandate of MONUC? If not, do all requests for support on particular tasks or operations have to be routed via Brussels? Will the support include military action against armed factions such as the Mai Mai in Katanga; the FLDR, who are mostly former Interahamwe genocidaires from Rwanda, numbering 8,000 to 10,000 in North Kivu; and the LRA, now reported to be concentrating in Garamba National Park, where the leader Kony and his deputy Otti have now joined up?

Under-Secretary-General for Peacekeeping Operations, Mr Guehenno, said that MONUC had asked the Security Council for a complete brigade in northern Katanga, where the UN had so far had no presence. The Secretary-General also said that he made a request for an unspecified increase in the MONUC force but was refused by the Security Council. Did it make that decision on the grounds that troops were not needed in the province, or because it formed the view that no suitable member state or states would be willing to provide the extra troops? Did it ask the EU whether the 1,500 troops it is going to supply could be used in northern Katanga? It is now intended to redeploy a battalion from north Kivu, which means less protection for civilians in a province where the FLDR and, even more so, the Congolese army itself—the FARDC—are accused of dozens of atrocities every month. But the consequences of neglecting Katanga are even more serious.

I understand that in the past six months 150,000 people have fled their homes, caught in between the Mai Mai and the undisciplined army. Earlier this month MONUC asked for the withdrawal of the 63rd Brigade, stationed in Mitwaba, which has been guilty of serious crimes against civilians. I hope that the noble Lord can assure me that those troops have now been replaced by MONUC forces.

From all the reports made by the UN, the FARDC is responsible for infinitely more atrocities than any of the non-state armed groups, and surely it ought to be drastically reduced in size, dismissing soldiers who commit any acts of violence against civilians, and making sure that the core who remain are properly

trained, equipped and paid. The International Crisis Group says that reform of the army is far behind schedule, and it criticises the policy of demobilising militias and giving handouts to ex-combatants. Of the $2 billion spent on the DRC by the international community so far, only a small fraction has been used to improve the status and management of the armed forces and the police. We know something about this from our experience in Sierra Leone. If the UN adopts the cluster response principle being tested in Uganda, which we talked about a couple of weeks ago, could the United Kingdom perhaps volunteer to play the lead role in the security sector reform cluster in the DRC?

In spite of all this, the security situation is better than it was a year ago, and the decision to postpone the elections turned out to be fully justified. There have been some hopeful signs—notably the decision at the end of last week by the biggest armed group, RCD-Goma, to end its boycott of the peace process, and for its leader, Azaria Ruberwa, to stand as a candidate for the presidency. As the noble Lord, Lord Giddens, reminded us, the first trial has begun at the ICC of a prominent war criminal, Thomas Lubanga, who is accused of forcing nine year-olds to fight for his Union des Patriotes Congolais in blood-drenched Ituri. Other militia leaders from the same area are awaiting trial on charges of killing nine Bangladeshi peacekeepers in February last year.

MONUC has captured Bosco Atubo, one of the LRA's senior commanders, in Garamba, and I hope that this means it is on the trail of Kony and Otti. It would be a major achievement if MONUC and the FARDC brought these evil men to justice, ending their reign of terror over large areas of Uganda, the DRC and south Sudan, boosting confidence in the elections and helping to promote amicable co-operation between the three neighbouring countries.

In both south and north Kivu, thanks to MONUC, it was claimed that voter registration was carried out in almost every polling district before the December 2005 referendum, at which 25 million people voted. But the register was not perfect, and Etienne Tshisekedi has asked for it to be reopened, because he now accepts that there was massive support for the new constitution. Although the head of the Electoral Commission said there was no time, surely a supplementary list could be produced over the next 10 weeks to include not only Tshisekedi's UDPS supporters, but also the districts not covered, and the voters left off the register last October. If nominations can be extended, as the right reverend Prelate explained, why not registrations, too?

Will the refugees and internal exiles be able to vote, and if so, have they been registered? Secondly, was the registration equally successful in the north, particularly in the areas of Ituri and Bunia, and in Katanga province in the south? People are still crossing Lake Albert into western Uganda, though not in large numbers, and clashes were reported with rebel forces south of Bunia only last Wednesday. It would be good to have some reassurance about the stability of that area in the period leading up to the elections.


But it is also time to begin thinking about the next stages. The Secretary-General has talked about the post-election challenges, which need the continuous assistance of the international community. The priorities that he mentions are the reform of the army and the police, and the establishment of state authority and the rule of law. To achieve these objectives we need to stay the course, recognising that it will take several years. But as the DRC starts to build effective and disciplined police and armed forces, MONUC will downsize, and its role will shift towards training.

Correspondingly greater attention will need to be given to the question of how the vast mineral riches can be harnessed for the benefit of the people, and not for the foreign interests dealt with in the reports of the UN Panel on the Illegal Exploitation of Resources of the DRC. There is now a mining code, developed with the assistance of the World Bank, but it is not well enforced and has failed to attract large investors. Huge quantities of unprocessed minerals are smuggled across the borders into Zambia untaxed, losing state revenue. Foreign business interests and corrupt politicians have contributed to instability. Potentially, DRC is one of the richest countries in Africa. We must help the people not only to eliminate non-state armed groups and create a firm democratic foundation, but to establish control over their mineral resources so that they no longer need our help.
7.56
Posted by Eric Avebury at 3:11 PM No comments:

The consultant telephoned to say that the preliminary analysis of the biopsy sample didn't determine the nature of the abnormality. Further tests were being undertaken and she hoped to have the results by the time of the next appointment, on Monday April 2 at 15.00. Watch this space!
Posted by Eric Avebury at 2:58 PM No comments: 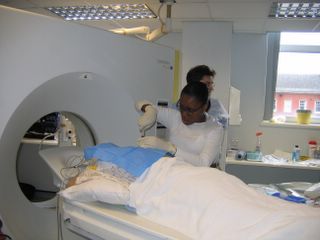 On the CT scanner table at King's, with Dr A from Nigeria taking a biopsy. Picture taken by nurse M, from Philippines. Procedure took about an hour altogether, but the stay in King's was 6 hours. An X-ray was taken 3 hours after the biopsy.

Posted by Eric Avebury at 4:40 PM No comments:

Chest X-ray on March 10 showed an abnormality at the top of the right lung (the opposite side to a persistent pain), confirmed at an interview with a consultant at King's March 13. She ordered blood tests and a CT-scan, both done March 14, and the consultant telephoned the following day to say she had discussed the tumour with a chest surgeon, with a view to its removal. Lung function tests were done March 17 followed by pre-assessment for CT-assisted biopsy, arranged for 09.00 March 24. Consultant's note reads:

"Looks like R apical lung cancer. No other evidence of spread. Waiting histo".

Median survival for all lung cancer patients is 15 months, 5-year survival 9%. Survival chances inversely related to size of lesion at discovery.
Posted by Eric Avebury at 3:42 PM No comments: