I should have added, in the note on the Second Reading of my House of Lords (Amendment) Bill last Friday, that the Leader of the Conservatives, Lord Strathclyde, called me 'shallow and discraceful'. I thanked him for his compliments, which will do me good with my Party.

Monday from 10.00 to 13.00 I chaired a very successful and well-atttended seminar on Bangladesh in the Moses Room, with speakers from the Commons, the European Parliament, the Bangladesh High Commission, Amnesty International, Human Rights Watch, the Awami League, the BNP etc. We were looking at the roadmap to the elections, which are to be held by the end of the year. In April there are to be local elections in the larger towns and cities, and the High Commissioner said that the ID cards would be issued to al the urban electors, and the registers would be published in good time. Although the timetable has slipped, the authorities will consider publishing a revised paper on the tasks that remain to be completed before the general election. The Electoral Commission has recommended that the restrictions on political activites should be lifted on March 20, and they are in fact being progessively relaxed. There are still concerns about the treatment of some independent TV stations and some print journalists, and we are intending to summarise these and other matters raised during the seminar in a communication to Dhaka, via the High Commissioner.

Monday afternoon from 16.00 to 18.00 I had Select Committee on International Organisations, which is considering whether the UK gets value for money from its payments to the World Health Organisation etc, in tackling communicable diseases - mainly HIV/AIDS, TB and Malaria, the three largest killers (though I hope we will pay some attention o pneumococcal disease, which kills a million children a year). We are also looking at the organisations that are preparing for the next flu pandemic,a matter of when, not whether. The Committee took evidence on Monday from the Health Protection Agency, which has an important role to play in protecting our own population against communicable diseases as well as other potential hazards such as chemical and nuclear, by providing impartial advice and authoritative information on health protection issues to the public, communities, professionals and to government.

Then from 19.30 to 20.30 I was in the Chamber speaking on two Orders - one on the above-cost fees to be charged for certain immigration services, the other on the vast database to be constructed giving details of the passports and 'Pasnger Name Records' of every person entering or leaving the United Kingdom, at a cost of £1.4 billion. Of this, £240 million is to be charged to airlines.After the debate I had a call from the Geneva-based SITA, the world's leading service provider of IT business solutions and communication services to the air transport industry, who are coming to see me to discuss problems arising from this proposal. Somebody reads Hansard!

Tuesday I hosted an English Speaking Union tea party as understudy for my colleague George Thomson (Lord Thomson of Monifieth), who wasn't well. George is 86 and pretty good for his age, but I think he's had some knee problems recently.

Then I had a meeting with Hugh McKinney and Nick Osbourne to discuss the work of the Al-Party Group on Pneumococcal Disease, and particularly the outline of a report by the Group.

In the dinner hour debate I spoke on the human rights situation in West Papua. The UN Rapporteur on Human Rights Defenders, Hina Jilani, was there last summe, and as well as her report, there is a good deal of material from the US State Department, Human Rights Watch and Amnesty International. The Indonesians had also invited Manfred Nowak, the Rapporteur on Torture, to visit West Papua, and openness to the UN Special Procedures is a move in the right direction, though journalists and human rights NGOs are still not welcome in the Province.

Wednesday, Party meeting 14.00 to 15.00. Then I fielded a question on the return to war in Sri Lanka, and the recommendations of the All-Party Representative Committee there. I asked what DfID was contributing towards the Common Humanitarian Action Plan, which it is feared may have to assist half a million people; whether the Ministr agreed that limited devolution of power to the north and east would do something to mitigate the polarisation of the two communities, even though it would be better to insist that the all-party committee recommendations are published by April, even if the parties weren't unanimous, and if the Minister would comment on the need for a more politically powerful contact group, now that the Norwegian role has come to an end.

After questions I attended a meeting of the Parliamentary Human Rights Group officers - I'm Vice-Chair - with the Russian Ambassador, largely to discuss the situation in Chechnya. He agreed that the Group could send a delegation to Chechnya.

Today I fielded a question on the queues at immigration control at the UK's airports. The evidence is that the length of the queues vary, from 0 to 68 minutes, and there must be best practice that could be developed from an analysis of the reasons for the differences between one airport and another.

After lunch I was invited to te office of the Leader of the House, Cathy Ashton (Baroness Ashton of Upholland) who was receiving a large party of schoolchildren She had promised to get me the answer to a question I had tabled more than three and a half months ago, on the dates of the former Prime Minister Tony Blair's contacts with Rupert Murdoch towards the end of his term of office. The schoolchildren left; the answer to the question arrived hot off the press, and Cathy handed it to me!
Posted by Eric Avebury at 5:21 PM No comments:

Visit by the Ven Khemadhammo Mahathera 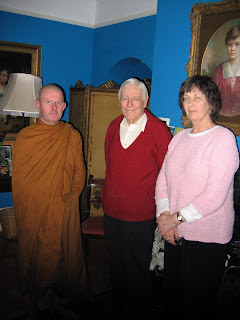 Posted by Eric Avebury at 11:36 PM No comments:

British and European parliamentarians have said the Bangladesh caretaker government should live up to its political obligation by lifting the state of emergency so as to allow political activities and political reform.
As "friends of fair and democratic Bangladesh", they have reminded the government of its obligation to hold free and fair elections.
The observations were made at a seminar on "The Roadmap to Parliamentary Elections?" held yesterday in the Moses Room at the Houses of Lords.
The seminar was organised by the International Bangladesh Foundation and chaired by Lord Avebury, vice chair of All Party Parliamentary Human Rights Group and chairman of International Bangladesh Foundation.
It was attended by MPs, MEPs, peers, councillors and representatives of human rights organisations, including Amnesty International, Human Rights Watch, Global Human Rights Defence, Jumma People's Network, Nirmul Committee and Bangladesh Hindu Buddhist Christian Unity Council.
The speakers at the seminar said human rights violations and lifting of the emergency rule must be placed on the reform agenda as a top priority and the government must respect human rights of its citizens and ensure that no torture takes place.
Lord Avebury in his opening remarks said, "We're concentrating on the conditions that will enable free and fair elections to be held as scheduled before the end of the year."
He reminded that according to the electoral roadmap, talks with political parties were to be completed by the end of 2007, and electoral reforms to be passed by March. "These targets have slipped," he said.
Saida Muna Tasneem, counsellor at Bangladesh High Commission in London, gave a presentation on and an overview of the caretaker government's commitment to the roadmap to parliamentary elections by December 2008.
She informed the seminar of the progress in voter registration work and various reforms the government has already implemented, including separation of the judiciary and formation of independent Election Commission, Anti-Corruption Commission and National Human Rights Commission.
Tasneem called for continued support from the international partners for successful completion of the caretaker government's roadmap and reforms.
Baroness Pola Uddin, chair of Britain-Bangladesh All Party Parliamentary Group; Anne Main MP, chair of Conservative Friends of Bangladesh; Jeremy Corbyn MP of Britain-Bangladesh All-Party Parliamentary Group; Robert Evans MEP, chair of European Parliament's South Asia Delegation; Dr Charles Tannock MEP, vice president of subcommittee of European Parliament's Human Rights; Tim Parritt, deputy programme director for Asia of Amnesty International; Brad Adams, Asia director for Human Rights Watch; and Sultan Shariff of the Awami League also spoke at the seminar.
Joshna Miah of BNP, MA Rauf of Gano Forum, and Dr Ahmed Ziauddin, Bangladesh Centre for Genocide Studies, Belgium, and Sally Kebble MP also attended the seminar.
In the general discussion that followed, speakers expressed their "deep concern over the human rights abuses" under the state of emergency in the country. Some speakers raised the issue of the trial of war criminals.
The speakers, however, appreciated the various steps taken by the present government against corruption, terrorism and welcomed Chief Adviser Fakhruddin Ahmed's recent comments against the war criminals but stated that it is the duty of the government to initiate cases and take initiatives against the alleged war criminals.
Lord Avebury in his concluding remarks said, "There has to be freedom of expression and of assembly if elections are to be free and fair."
He added: "Elections aren't only about having the right laws, an accurate register and impartial officials. They depend on the preconditions in the months before polling day, and crucially, on the maintenance of a peaceful environment during election campaign."
Posted by Eric Avebury at 11:59 AM No comments: 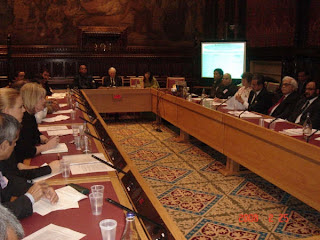 Posted by Eric Avebury at 11:33 PM No comments:

Second reading of my House of Lords (Amendment) Bill this morning. The Tories say that the scheme for maintaining the number of hereditaries at 92, which was cobbled together by Jack Weatherill in 1999, was binding in honour on the two main parties' front benches, and thus on the House as a whole. But there is a well-established principle that Parliament can't bind its successors, and back-benchers of all Parties, who weren't part of the backstairs deal, have no obligation to stick to it. Not a single one of the speakers defended the by-elections on objective grounds
Posted by Eric Avebury at 11:11 PM No comments: 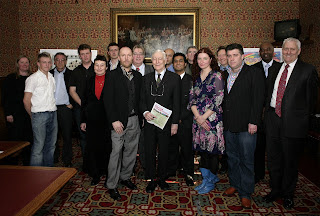 Posted by Eric Avebury at 11:08 PM No comments: 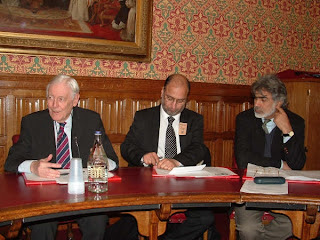 During the week's February recess, spent four days in Pakistan talking to journalists, lawyers and others about the legal crisis, with 50 judges sacked, 3 judges of the Supreme Court in incommunicado detention. Most were pessimistic about the likelihood of change after the February 18 Parliamentary elections, but they were reasonably fair, and there is some hope now that the rule of law will be restored.

Tomorrow I have the second reading of my House of Lords (Amendment) Bill, to abolish the by-elections to maintain the 92 hereditary peers. But with the emergency legislation on Northern Rock there's a danger that Friday's sitting will be cancelled.
Posted by Eric Avebury at 9:34 PM No comments: