These results were before a blood transfusion

Posted by Eric Avebury at 12:42 PM No comments:


Creatinine 172, still way above normal range 45-120, and sharp falls in Hb, WBC, N'phils and Plt.
Lets hope tomorrow is better or it means two pouches of blood.
Posted by Eric Avebury at 9:31 PM No comments:


Creatinine 172, still well above normal range of 15-120. Abnormally high levels of creatinine warn of possible malfunction or failure of the kidneys. It is for this reason that standard blood tests routinely check the amount of creatinine in the blood.
Posted by Eric Avebury at 11:51 AM No comments:


Nb Creatinin was 297 compared with normal range 45-120
indicating dehydration, so I'm drinking a lot & will have another
blood test tomorrow. Platelets continue to fall but neutrophils are
above the level of 0.5 µmol/L described as 'severe neutropenia',

Plan B appears to consist of regular blood transfusions and no
medication to replace the hydroxycarbamide.

Haematologists have written to Professor H  the foremost expert
on myelofibrosis to see whether she has any ideas on treatment.
Posted by Eric Avebury at 7:50 PM No comments:


Haematology outpatients this morning. There wasn't a Plan B, and obviously there was no suggestion of going back onto hydroxycarbamide. The stopgap plan is to have weekly blood tests, with transfusions if the Hb plummets, as it may well do. The neutropenia doesn't seem to have been affected by stopping the hydroxycarbamide, and the doctor, when asked, didn't have any ideas on medication that would increase the level of neutrophils.

There was a suggestion by one of the haematologists who saw me during my 5 days in hospital that myelofibrosis could be transitioning to leukemia, and I had expected this to be confirmed or otherwise by the blood tests. However it wasn't mentioned in my discharge notes, so the evidence is presumably inconclusive.
Posted by Eric Avebury at 7:54 PM No comments:

Last Thursday I woke up with a fever and severe vomiting and was taken to KCH A&E by ambulance. The infection was later identified as coagulase negative staphylococcus. Anti-emetic stopped the vomiting and a broad spectrum antibiotic dealt with the infection. I had two pouches of blood to deal with neutropenia, see below, and was discharged at 23.00 yesterday evening.

There had been some discussion of a bone marrow biopsy to get a better picture of the number of blasts and fibres in the blood, but in the end the haematologists decided against that course of action because of the risks, and because an extra blood test taken December 10 would be likely to give the information necessary for Plan B to replace hydroxycarbamide. Since that medication had been stopped altogether, there hadn't been a rise in the platelets, the original reason for that drug to be prescribed. On the contrary, Plt fell sharply, and other components also went down. Anyway, I've got a regular haematology outpatients tomorrow morning, so it will be a good opportunity to see whether there is a standard answer to the question of how to deal with the appearance of blasts and fibre.

After first thinking that a bone marrow biopsy would be a good idea, the haematogists have had second thoughts because of the risks attached to the procedure. I'm certainly not sorry its unnecessary because its quite painful, though I didn't say so when it was done for the diagnosis in 2011:

.....
Tuesday morning I was at King's, to have a bone marrow biopsy to help diagnose the myeloproliferative disorder they think I've got. Its a disorder of the blood, the indicator of which was a platelet count which shot up to over 1,000 compared with the normal 500. After a local anaesthetic a needle is stuck into the pelvis on the right side, leaving no apparent side effects apart from bruising.


Mark Zuckerberg says that his $45 billion gift to a new charitable foundation [http://bbc.in/1lvqSqo] will be used to promote equality. UK income inequality is among the highest in the developed world and evidence shows that this is bad for almost everyone, see  https://www.equalitytrust.org.uk/. It would be good if our philanthropists would follow the example of donors in the US and do more to combat inequality, but it should also be an explicit goal of our Government's policy
Posted by Eric Avebury at 1:08 PM No comments: 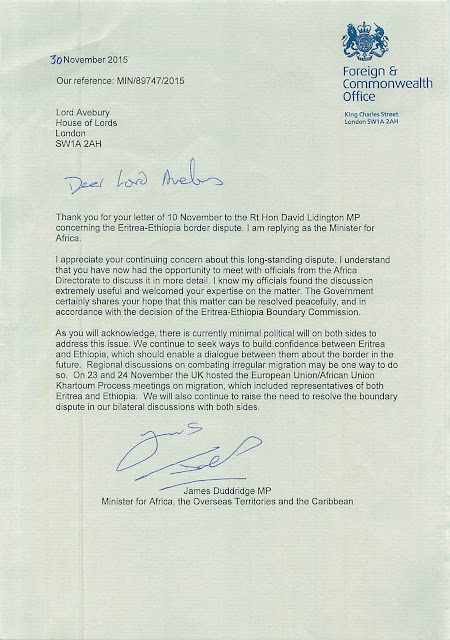 This illustrates the reason why the problem of the Eritrea-Ethiopia boundary remains unsolved. The parties agreed beforehand that they would accept the decisions of the Boundary Commission, but Ethiopia reneged on the decision by the EEBC to demarcate the boumdary by coordinates, and the international community including the UK let them off the hook by saying that "there should vbe a dialogue between them about the border". This would imply that after all, the EEBC's determination was not final and binding, and that it could still be adjusted to suit one of the parties.

The only way to break the deadlock and end the confrontation which sterilises a huge area along the border, keeping armies numbering tens of thousands on either side and preventing trade across the frontier, is for the UN Security Council to insist that Ethiopia stand by its undertaking to accept the  EEBC. The UK should be taking the lead on arriving at this solution.

Posted by Eric Avebury at 7:53 PM No comments: