Back in hospital again

Eric was readnitted to King's College Hospital on Tuesday 19 January. Two days later Mr Wilkins performed an angioplasty on both renal arteries, as he did most successfully two years ago.   This time, various problems arose post-op. Eric appeared to have had a reaction to the units of blood he was given.  Also, his body, particularly his chest, became overloaded with fluids.  He developed an infection.  All these symtoms are being treated and Eric is beginning to recover, albeit slowly. However, as background to this, Eric's myelofibrosis is now starting to develop into leukaemia.

The family are  having talks with the palliative care team ar KCH to arrange for Eric to come home soon and be treated at home.  Lindsay.
Posted by Eric Avebury at 12:00 AM No comments:

Patient admitted with deterioration in renal function. Known myoloproliferative disorder, requiring platelet and blood transfusions. Previous bilateral renal artery stenting. with rehydratng. Found to be dehydrated following period of loose stool and renal function improved with  rehydration. (creatinine 300 < 14 and downtrending at discharge). Repeat renal artery dopplers demonstrated in-stent re-stenosis severe on left side, moderate on left) and after disccussion in  our rediology MDM, it was decided that repeat angioplasty/stenting would be beneficial in the long term. This was scheduled as a non-acute procedure due to recovering renal functiion - unfortunately it was not possible to perform this as an in-patient, and it will be re-rescheduled in a routine out-patient setting. His discharge Hb was 83. We have inserted a PICC line to facilitate future blood product infusion. He will be followed up by the haematology doctors next week (date to be confirmed) and we will see him in renal outpatients on the 28th January.

Note: I have an appointment scheduled with Professor H at Guy's on Monday Jan 18 at 14.45., and     we also have Dyno-Rod coming in the morning -similar problem.
Posted by Eric Avebury at 2:52 PM No comments:

Eric unexpectedly sent home today.  Renal doctors decided that Eric's kidney function had improved greatly, due to rehydration and two units of blood.  We are all delighted to have him home, particularly Stripey the cat who won't leave his side. The doctors say they will carry out the procedure to clear his renal arteries on another date, possibly when things quieten down - they seemed to be dealing with a large number of emergency procedures this week.  Lindsay
Posted by Eric Avebury at 7:14 PM No comments:

We had hoped that the procedure to clear Eric's renal arteries would have taken place today, but this was not to be,  Tomorrow, Friday is the day.  This is to be carried out by Mr Wilkins, who by now is very familiar with Eric's arteries.  We hope that Eric will be allowed home on Sunday.  Hooray! Lindsay
Posted by Eric Avebury at 11:49 PM No comments:

Correction to Monday's blog:  it was not a Hickman Line, but a PICC line (periphally inserted central catheter) which was yesterday put into Eric’s arm.  Roughly the same function as the Hickmann, but in the arm, rather than the chest.   Eric was taken down to Radiology dept today, in preparation for his re-stenting, but brought back again as an emergency case came in ahead of him.  They will try to book him in again tomorrow, or possibly Thursday..  Eric was cheerful, without a fever, and ate some dinner this evening.

Junior doctors and their supporters were demonstrating outside King’s today.  Best of luck to them. Lindsay
Posted by Eric Avebury at 11:08 PM No comments:

Another day at King's

Eric still in King's.  He continues to be treated for an infection but is better than yesterday with little or no temperature, The doctors plan to do an angioplasty, probably on both renal arteries, in a day or so.  One is nearly blocked and another going that way.  They don't expect any problems.  It's discouraging that the renal arteries became blocked again after only two years.   Eric had a Hickman line put in his arm, enabling the easier delivery of blood and other fluids in hospital and at home..  Lindsay
Posted by Eric Avebury at 8:28 PM No comments: 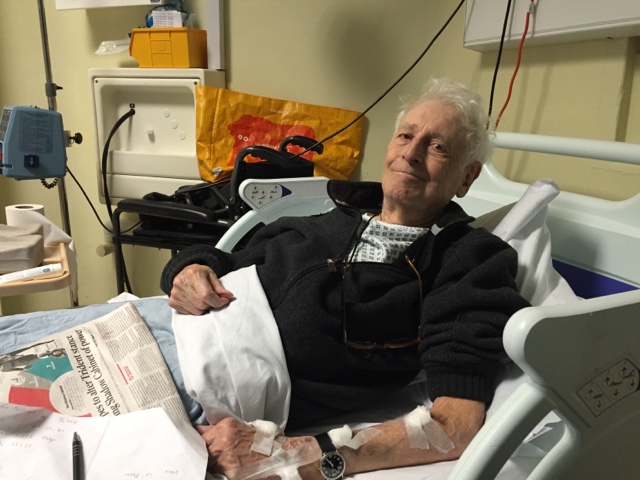 Hb improved from 70-85, creatinine reduced from 174-164, platelets 22, not improving, but doctors say further transfusion not needed. I was hoping to spend a few hours at home but I have a slight fever so they decided to not let me out, but hopefully they will soon.


Posted by Eric Avebury at 5:26 PM No comments:

After being unwell for several days at home, yesterday Eric was admitted to a King's College Hospital renal ward.  It appears that one of his renal arteries has narrowed and that he may be needing another renal angioplasty to open it up and restore a good blood flow to his kidneys.  The platelets in his blood are also very low and should be restored before this procedure, which may take place tomorrow.  We hope that he may only be in hospital for a few days.   Lindsay Avebury
Posted by Eric Avebury at 1:36 PM No comments: