Lindsay writes: This afternoon Eric is moving to Lewisham Hospital, Lewisham High Street, south London, to convalesce for about a week. He will be in A4 Marlowe Ward, which is in the women's and children's wing of the hospital, on the 4th floor. This is part of King's College Hospital, based at Lewisham. It is a rehabilitation ward and has "dedicated input from a ward based Physiotherapist, Occupational Therapist and Social Worker", should he need all three! 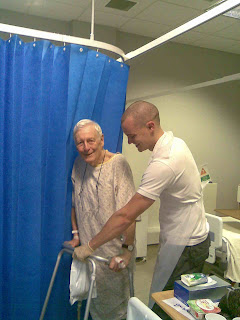 Lindsay writes: Eric in good spirits today - he has walked from his bed to the corridor, with the help of a physiotherapist. He has banished the morphine as it makes him too fuzzy and sleepy and is coping well enough with the occasional paracetemol. His doctor is arranging a bone density test, to see why bones seem to be breaking apparently so easily. Eric may soon be moved from his present acute ward to the King's recuperation ward at Lewishham hospital, where he will receive much more intensive physiotherapy, for some days before returning home. As well as Lindsay, Eric received visits from Benny Sedaka and Felicity Devonshire, Philip Epstein and son Lyulph.
Posted by Eric Avebury at 10:34 PM No comments:

Lindsay writes: No plaster cast was necessary as a large metal (could it be Titanium?) plate/screw is holding his left femur together. This operation is called Dynamic Hip Screw Fixation, and if you want to be blinded by science, his doctors advise you go the to AO Foundation website. Eric is making good progress. His physio got him out of bed today, made him stand up and has given him various exercises. Now that the operation anaesthetic/epidural has worn off, he's not quite so comfortable as yesterday, but managing well enough on paracetemol.
Posted by Eric Avebury at 11:24 PM No comments: 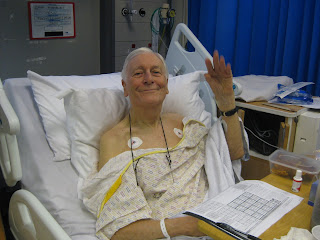 Lindsay Writes: This morning's operation to repair Eric's broken left femur went very well. When I visited him this afternoon, he was sitting up in bed looking very cheerful (see photo) and relaxed. He was in no pain at all, not from his leg nor from the rib which he broke over three weeks ago.

Physiotherapists will be getting him out of bed tomorrow, sitting in a chair.
Posted by Eric Avebury at 5:47 PM No comments:

Labels: after the operation., Eric

Lindsay writes: Eric had the operation to put a pin in his left leg early this morning. He is now back on the ward and the ward nurse tells me he is pain free. I'll be visiting him shortly.
Posted by Eric Avebury at 11:04 AM No comments:


The good news is that the consultant says that the pain which Eric has been experiencing in his chest for the past three weeks is caused by a broken rib. We have no idea how this happened, as we can’t remember Eric falling over. Broken ribs are very painful and take quite a few weeks to heal, but are fortunately not serious.

However the not so good news is that during his visit to King’s College Hospital haematology department this morning, Eric tripped and fell down. In doing so, he broke the top of the femur of his left leg. It’s likely the orthopaedic surgeons will operate on him in the next 48 hours, to put a pin in the leg. If all goes well, he will probably be discharged from King's in a week. He's being given morphine for the pain at the moment. Victoria and Alan came straight over to King's when they heard the news.

When I left the hospital an hour ago, A&E staff said Eric would be going up to Twinings Ward. Victoria and Alan are with him at the moment, and I will return later on.
Posted by Eric Avebury at 2:55 PM No comments:

Labels: In King's A and E with Alan and Victoria

In the nuclear scanner last Thursday 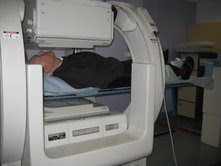 Posted by Eric Avebury at 7:26 PM No comments:

Yesterday evening, to the Shiraz Mirza Hall, for a packed dinner with Ed Davey MP, with guests from the local communities including Ahmadis, Arabs, Tamils and Koreans. It was great to meet so many of Ed's supporters from such a wide variety of backgrounds. The hall was named after Councillor Shiraz Mirza, the Deputy Mayor of the Royal Borough of Kingston upon Thames, who had raised the funds to build this and another hall for the benefit of local people. He told me he had served as Mayor twice, the first Asian councillor in the Royal Borough to have been given that honour.

I spoke about some of the issues Ed deals with as LibDem foreign affairs spokesman, and particularly the need to tackle the ideological motivation for terrorism: The people of Pakistan are now paying the penalty for successive governments' failure to stand up to extremists, in the wave of suicide bombings which have killed 179 people in the last two weeks alone, and I was glad to see this echoed in the headline of The Independent's first leader this morning: 'This is a battle that Islamabad should have embarked upon long ago'. But they are right to point out that so far there is little sign of action against the fundamentalist madrassas, which provide the ideological waters in which the terrorists swim. Military action in Waziristan is not going to dent the numbers of young people indoctrinated with Salafist hatred of mainstream Islam, which leads to indiscriminate killing of ordinary Pakistani citizens.
Posted by Eric Avebury at 9:23 AM No comments: 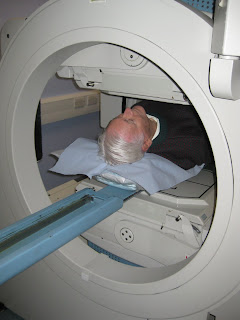 Posted by Eric Avebury at 9:55 PM No comments: 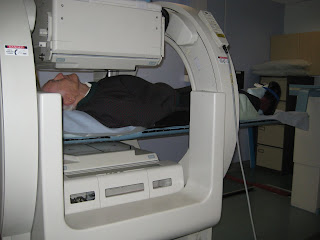 Parliament resumed after the long summer recess on Monday. Whether its really necessary for us to have three months away from Westminster or not is doubtful, but perhaps less so at our end of the building than for the Commons, who have plenty to do in their constituencies. There is the argument that Members need the time to pursue their specialised interests such as visits abroad if they deal with foreign affairs, and of course there are the Party conferences in September.

Tuesday I spoke on the clauses dealing with alcohol abuse in the Policing and Crime Bill. There is a tacit recognition that the alcohol harm reduction strategy of 2003 isn't working, since all the indices of alcohol harm such as hospital admissions for alcohol-related causes are heading upwards, but as yet the Government refuses to admit that it was utterly mistaken to cast aside price and availability as the main levers that affect consumption.

Wednesday, the morning was occupied in Sub-Committee F taking evidence from the Minister who deals with immigration and asylum at the Home Office, Phil Willis MP, and two of his officials, on the Swedish EU Presidency's justice and home affairs programme. The transcript will be on the Parliamentary website in a few days' time

On Tuesday I was seen at King's by Mr M, the surgeon who did my last operation, about a persistent pain in my left side. He ordered a nuclear bone scan using technetium 99 (see en.wikipedia.org/wiki/Nuclear_medicine), which I had this morning, and a CT scan next Tuesday, and prescribed Tramadol, an effective painkiller. I had already had an X-ray, which was clear, and a blood test, normal except for a gradual decline in haemoglobin since April 2006. Mr M is seeing me again next Friday to discuss the results of the tests and whether any further procedures are necessary. I thought it best to record the possibility, because in the meanwhile I'm going to avoid taking on any more engagements after that, just in case I have to cancel them.
Posted by Eric Avebury at 8:54 PM No comments:

At the Derby Multi-faith Centre 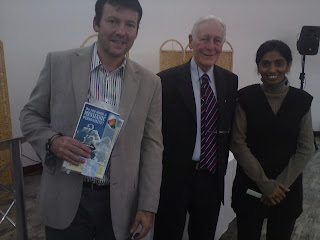 Posted by Eric Avebury at 12:11 PM No comments:

Yesterday, to Derby, to give a lecture on Freedom of Religion at the Multifaith Centre, which is part of the University but is managed by a separate Trust. The building is unusual and imaginative, and the Director, Dr Phil Henry, has evidently been successful in getting all the faith communities in the city involved. I do wonder, though, whether people who want to reach out to religions other than their own aren't the exception.

As a general rule, I think most people's attachment to their religion is based on familiar cultural signals that go back to their childhood, rather than an assessment of which set of beliefs seem intrinsically most probable. For the majority of people, who are not particularly religious the 'majestic and noble lines of Lucretius' quoted by Mr Gladstone in his great speech on the Affirmation Bill would strike a chord. In the Grand Old Man's translation,

That belief, he said, was the mischief of the age. But it wasn't the Lucretians who started the Armenian Genocide in 1915, or the Holocaust in the 40s. Throughout the centuries, fanatics who believed their own brand of religion must prevail over all others initiated wars and genocides, and it is Salafist fundamentalism which forms the ideological basis for international terrorism today.

I didn't get a chance to look around the city and see how it had changed since I was there as a graduate apprentice at Rolls-Soyce in 1951!
Posted by Eric Avebury at 5:31 PM No comments:

Saturday we attended cousin Ivan Sokolov's memorial event at the Directory of Social Change near Euston. As well as family there were lots of colleagues who had collaborated with Ivan in his various social projects, particularly the Parent Network, which he founded. Jacqui had organised the event, with a few people saying things about his life, and pieces of his favourite music were played.

I had spoken to Ivan on Skype a couple of weeks before he died, and although he was very week he was still talking optimistically about possible cures - and he had sent me a long email describing the current favourite. Jacqui and Josh must have been through a bit of an ordeal caring for him as he approached death at home, but they seem to have coped with splendid courage.
Posted by Eric Avebury at 10:42 PM No comments: 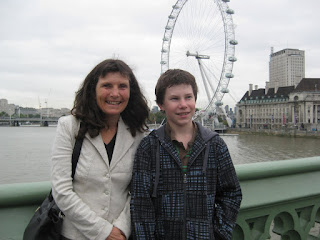 Posted by Eric Avebury at 9:15 PM No comments: 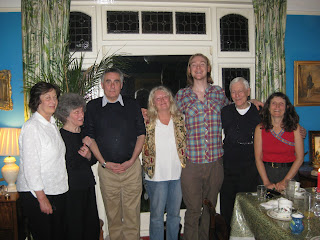 Posted by Eric Avebury at 9:10 PM No comments: