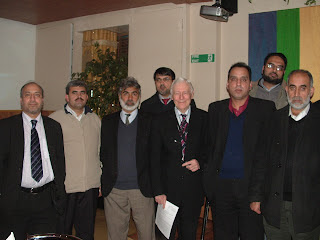 Posted by Eric Avebury at 4:53 PM No comments:

Last Thursday I spoke in a debate on human tafficking, the second we have had in the Lords this session. There e=were so many speakers we were confined to four minutes each, and today again the huge public concern over this vile trade was clear from two packed meetings in the Palace of Westminster - one by the UK Human Trafficking Centre to launch their Blue Blindfold campaogn to raise public awareness of the problem, the other to hear from Lin Homer the head of the Borders and Immigration Agency on what they are doing to combat trafficking. She was vague about what exactly has been done and what remains to be done of the Action Plan the Government produced last autumn in preparation for ratifying the Council of Europe Convention. She couldn't answer my question as to why there are apparently still 3,000 unaccompanied asylum seeking children expected to arrive in the UK this yeat, when all children arriving in the UK are now accompanied by an approved adult. There was some talk about how to identify a child who turns up without a passport and says he doesn't know what flight he was on, but there must be an unmatched adult who arrives at the same terminal.
Posted by Eric Avebury at 10:12 PM No comments:

This is a reconstruction by Jacqueline Taber of the portrait by Sir Thomas Lawrence PRA of Sarah Ward, formerly in the Victoria Art Gallery, Bath, but missing since it was stolen in 1986. It was probably one of the earliest portraits by Lawrnce, painted when he was a boy of 16 at Bath in 1786. Ms Taber resuscitated Sarah from a poor black and white photograph kindly supplied by the Victoria Art Gallery.

Sarah Ward was born at Clonmel, Ireland, on September 2, 1735. She belonged to the troupe of actors managed by her father John Ward (b June 24, 1704 October 30, 1773) and at the age of 17 married Roger Kemble (b March 1, 1721/22) on June 6, 1753 shortly after he had joined the troupe. Ward and his wife Sarah Butcher, also a strolling player, had 15 children, but apart from Sarah,only two sons, William and Stephen, survived, and neither are said to have had any theatrical talent. Life on the road must have been harsh for small children; most died as infants and the longest lasting of the remaining ten, Elizabeth perished before her tenth birthday.

Sarah must have been extremely tough. She turned down a rich Quaker and a young nobleman in favour of Roger Kemble, against the wishes of her father, who had compelled her to swear that she would never marry an actor. Afterwards, according to Ann Kemble Hatton, one of Roger and Sarah's 13 children, Mr Ward consoled himself with the thought

"My daughter Swore she would never marry an Actor, and by G-d Sir, she has religiously kept her word'.

Roger stayed with his father-in-law's company for the next eight years, and Srah's first child Sarak Kemble (the most famous of their offspring, thefuture Mrs Sdiddns) was born on July 1, 1753 at the Shoulder of Mutton Inn, Brecon, while the company was there on tour. The next child, John Philip, was born at Prescott, Lancashire, on February 1, 1757 and was followed by Stephen George at Kington, Herefordshire, on April 23, 1758. Sarah was playing the role of the pregnant Anne Boleyn in Henry VIII earlier othe night of his birth. Then came Frances, born December 28, 1759.

Around 1761 the Kembles may have left Sarah's father and struck out on their own. On April 2 1761 their fifthchild, Elizabeth was born in E+Warrington, Lancs, followed by the sixt, Mary, at Stratford-upon-Avon on January 3, 1763. She died in infancy. Later that year the Kembles returned to Ward, and when he retired on May 24,1766, Roger took over the management.

Six more children arrived during the first 11 years of Roger's management and all those who survived became actors. All except Frances also married actors. Sarah was said to be a disciplinarian,with her children and the company. A playbill of Charles the First at Worcester on February 12, 1767 records five Kembles in the cast, including Sarah as Princess Elizabeth.

The couple retired in 1781, and lived in London for the rest of their lives, though clearly they still had connections in Bath, where Lawrence painted Sarah's portrait at the age of 51. She died on April 24, 1807, aged 71,and was buried at St Marylebone on April 29.
Posted by Eric Avebury at 10:17 PM No comments: 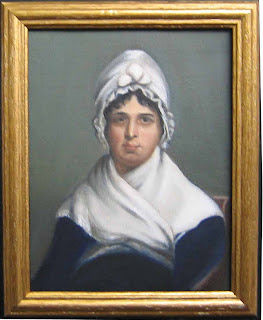 Posted by Eric Avebury at 10:15 PM No comments:

Harold Wilson's ill-fated attempt at House of Lords reform occupied the House of Commons for 21 sitting days in 1968-69. Twentynine years later, there are still hereditary peers, and incremental reform is stymied by some Tories' insistence that the 'Weatherill amendment' - a deal cobbled together by the foremer Speaker Lord Weatherill, and the then leader of the Tories, Lord Cranborne (now Marquess of Salisbury), to keep 92 elected hereditary peers until a comprehensive overhaul of the composition and functions of the second chamber can be agreed, should be treated as holy writ. David Steel introduced a Bill to give the Appointments Commission statutory authority and a few other modest changes agreed by a cross-party group of peers, but a blizzard of amendments appeared on the Order Paper, making it virtually impossible for the Bill to get through in the time allowed for backbench legislation. So I have re-tabled my own House of Lords (Amendment) Bill, which merely eliminates the topping up of the hereditaries every time one of the dies, through by-elections at which the only candidates eligible are the peers who were excluded by the 1999 cull. A more irrational and absurd way of making appointments would be difficult to imagine, but I know already, from a conversation with a very senior Tory, that they will do their best to scupper even this tiny step forward.
Posted by Eric Avebury at 9:53 AM No comments: 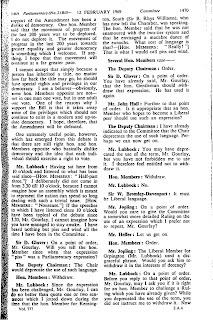 Posted by Eric Avebury at 9:48 AM No comments: 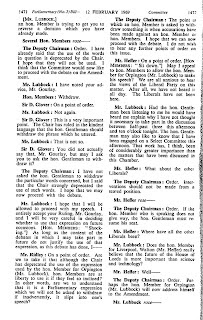 Posted by Eric Avebury at 9:47 AM No comments: 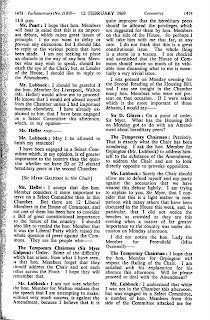 Posted by Eric Avebury at 9:46 AM No comments: 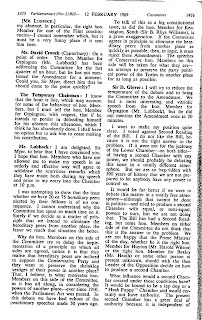 Posted by Eric Avebury at 9:43 AM No comments:

Our dear friend Phil Krone from Chicago who visits us often, has been promoting Barack Obama for more than a year - months before he even decided to run - and is on his way to New Hampshire after having campaigned for Obama in Iowa where he carried the small (676 people, 327 households, and 182 families at the 2000 census), rural, all white precinct of Elgin for Obama. It was his first visit there in 55 years, but as a child he had spent a week in Elgin every summer between 1947 and 1952 with Henry and Rose Wolf. Dr Henry Wolf, an old fashioned family doctor, was from Chicago and his father's best friend.

Phil believes that Obama will at least tie Hillary in New Hampshire, lose narrowly in Nevada and then score big in South Carolina. On February 5 “Super Tuesday”, there are a lot of states voting, including New York and Illinois, New Jersey and California. Phil thinks that this might be the day that the nomination is decided in favour of Obama. His tentative forecast is that Obama will come in second in New York and carry all of the other big states, and by that day he will be getting up to 90% of the black vote, not for reasons of hostility to Hillary Clinton or John Edwards, but out of unalloyed pride in the first African American to have a real chance of being president.

Senator Clinton said that 'while some hope for change [referring to Obama], some demand change [referring to Edwards] I work for change'. Phil told the Iowa caucus that he believed all of the major candidates were better than the Republicans and that they all hoped, demanded and worked for change. But the big difference was that "Obama IS change”. He told the 64 all white caucus participants at Elgim that while the United States is predominantly white, the world is predominantly yellow, brown and black, and as intelligent and good as they all are, only Obama is truly different and his election would indeed send a message to Africa, Asia and South American unlike any ever sent before."

Phil has always been an astute and hugely knowledgeable observer of political developments, both in the US and around the world, and I hope Gordon Brown is thinking seriously about the prospect that under Obama, the US would be turning its back on the disastrous foreign policies of the Bush era.

If I were a US citizen I would be voting for Mr Obama, and any time he's in town, he's welcome to dine at the House of Lords as my guest with a representative group of MPs and peers of all parties. But I hope that after the election, he will be getting an invitation from Downing Street.
Posted by Eric Avebury at 12:07 PM No comments: 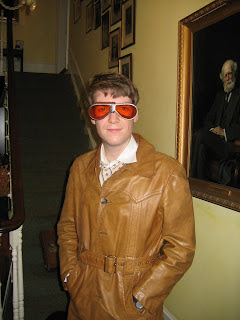 Posted by Eric Avebury at 12:06 AM No comments: