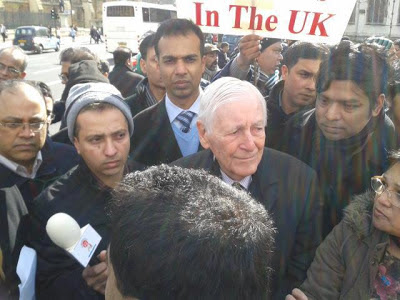 Posted by Eric Avebury at 11:46 AM No comments:

Monday Blood test and haematology. Platelets now within normal range, haemoglobin constant at 10.5. Hydroxycarbamide dose reduced. Talked to HMRC about me request for estimates of reduction in alcohol consumption, increase in revenue that would result from 10, 20 and 30% increase in taxation across the board. They had been asking me to wait for a scheduled update of the model, and now this has arrived, they want Ministerial approval for the release of the figures. I telephoned the Private Office of the Economic Secretary to the Treasury to request them to give this the nod, and await the result. Afternoon, the debate on adding caste as a protected charcteristic to Section 9 of the Equality Act. The debate was overwhelmingly in our favour, and we defeated the Government by 103 votes. Tuesday, debate on Welfare Benefits uprating in which I spoke about the failure of the Government to uprate the benefits paid to asylum seekers, which are already well below those paid to our own citizens in equivalent situations Wednesday, 09.15 meeting of Parliamentary Human Rights Group officers to look at programme of coming events and discuss strategy, followed by EU SubCommittee at which evidence was heard from the Cancer Campaign UK and the Tobacco Manufacturers Association on a new Directive further tightening the rules for packaging and sale of tobacco products. This is a good example of the merits of cooperation over the 27 member states. In the afternoon, a meeting to discuss Lord Falconer's Bill on assisted dying, to be introduced in the next session. Now that there is 15 years of experience of similar legislation in Oregon, the concerns which have been expressed may be answered, but there are still many peers who sat they have made up their minds and don't want to listen to facts, Thursday, meeting with GE to discuss the state of play on the pending decision on the future of plutonium stocks at Sellafield, The estimated cost of storing this hazardous material to 2050 is £67.5 billion, so there is a strong incentive for the Government to reach a decision on the proposals for reuse, The competitors are to use the plutonium to manufacture mixed oxide fuel (MOX); to adopt the Canadian Candu reactor, or to go for GE/Hitachi's PRISM fast reactor. The Nuclear Decommissioning Authority was supposed to report to Government on these alternatives by the end of last year, but this was delayed, first until March 2013, and now to an unspecified date in the future. Lunchtime, a packed meeting in Committee Room 3A with members of the UK chapter of the Bangladesh Nationalist Party. They had a long list of complaints on which they would like our Government to make representations to Dhaka. I had to explain that there is a line to be drawn to issues on which concern might be legitimately expressed, and others such as the abolition of the caretaker system of government during elections, which were entirely a matter dor the elected government. Later, took part in a debate on lump sum compensation payments for mesothelioma victims In the evening, to St Pauls Cathedral for the Tallis Scholars' 40th anniversary concert, anding with a great performance of Spem in Alium
Posted by Eric Avebury at 2:30 PM No comments: 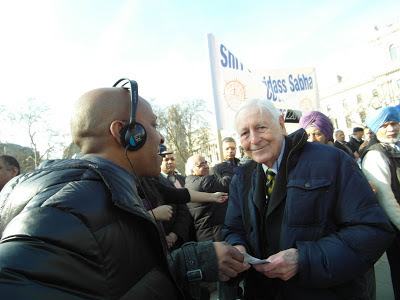 At the March 4 demo by Dalit organisations in Parliamant Square before the debate in the Lords on making caste a protected characteristic in the Equality Act. The Government resisted our proposal and we defeated them by 103 votes, but it remains to be seen whether they will try to reverse the Lords' decision when the Bill goes back to the Commons.

Posted by Eric Avebury at 1:05 PM No comments: